CUBAN FARMERS TO BACHELET: THE DANGER OF FAMINE IS DUE TO THE INTERNAL BLOCKADE 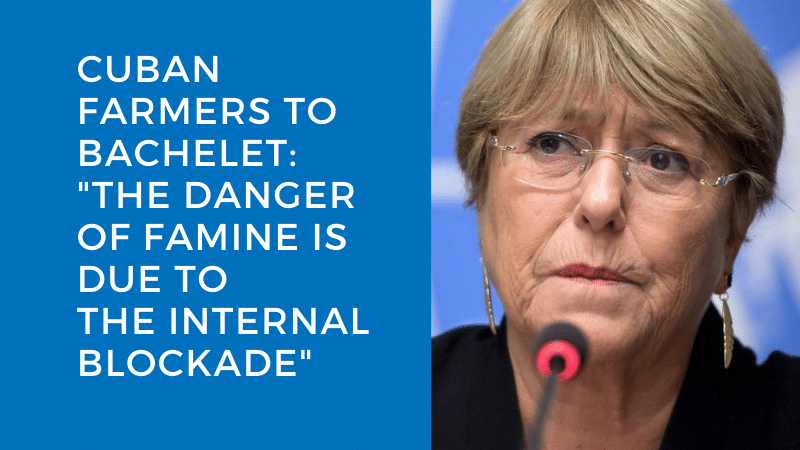 In his State of the Union address for 1944, the year that would mark the final turn of World War II, the 32nd President of the United States, Franklin D. Roosevelt, observed the following:

“We have clearly understood that individual freedom cannot exist without economic security and independence. Men in need are not free men. Dictatorships are built upon hungry and jobless people. ”

Roosevelt advocated for a Bill of Economic Rights, which in 1948, during the postwar period, were finally inserted in the Universal Declaration of Human Rights, including -in article 25- the right to adequate food. In 1966 it was also enshrined in article 11 of the International Covenant on Economic, Social and Cultural Rights.

The intention of these instruments is to protect the right of people to eat with dignity, not suffering from hunger, food insecurity or malnutrition, which implies that there is enough food available and also the means to access it, and that the dietary needs of people are duly satisfied.

In recent months, Cubans have been facing a desperate food situation, which has now worsened after the Government prioritized food sales to those who have freely convertible currency, that is, hardly 40% of the population. Even worse, the current scarcity of foodstuffs might well escalate to famine, due to the lack of foreign exchange to import them generated by the global pandemic, and to the stubbornness of the Government in blocking the domestic productive forces and the market mechanisms that can save the country from such a disaster.

A statement by five U.N. officials associated with Ms. Michele Bachelet’s office, who requested the lifting of economic sanctions against Cuba, among other countries, to prevent the suffering of the population, prompted a letter from two unions of farmers emphasizing that it is the Cuban Government’s internal blockade against the agricultural productive forces which is about to unleash famine on the island. Due to the proximity of this tragedy, these independent Cuban farmers have also requested an urgent intervention from the highest international authority on human rights:

Subject: REQUESTING YOUR URGENT INTERVENTION TO PREVENT A FAMINE IN CUBA

A famine is looming over Cuba, but it can certainly be avoided. Its cause is neither external nor related to a natural disaster. The famine looming on Cuba’s horizon is a consequence of the fierce internal blockade enforced by the government on our country’s productive forces.

A recent statement by a group of UN rapporteurs and experts called for the lifting of sanctions on certain countries, Cuba among them. We ask you to, please, share this letter with them.

In the case of Cuba, we can assure you that the United States embargo does not prevent the Cuban government from buying tons of food every year from that country, which are then sold to the population with ominous markups. US sales of medicines to Cuba are not precluded by these sanctions either.

Cuba must import 80% of its food due to the centralized State economy’s failure to produce it. If the Cuban government does not have money to acquire enough food now it is because, in addition to their economic mismanagement and the impact of Covid 19 on tourism, they have not fulfilled their commitments to pay interest on the reduced debts worked out just five years ago, once their creditors agreed to forgive them billions of dollars.

But there is something that many people ignore: private Cuban businesses that can prove such condition are not included under US sanctions. Any US company can trade with, and even invest in them, yet the Cuban government never allowed it. When in 2016 the Nestlé corporation wanted to buy coffee directly from the Cuban private farmers, the government meddled and made those relations impossible.

We Cuban farmers only have lands in usufruct, with no property deeds; we are governed by a State-managed collection system that monopolizes our production and commercializes it; we are burdened by taxes, harassed with continuous inspections and subjected to confiscation of our crops and tools. They have declared an economic war on us, in which special operatives of the armed forces and the police participate, while incessant campaigns are carried out on the State media monopoly to assassinate our reputation. They present us as selfish bandits to our brothers in the city, and yet we are bearers of the solution to spare the population a famine.

In our public demand “There’s no Country without the Countryside”, addressed in April to President Miguel Díaz-Canel, we proposed five measures that could prevent this tragedy from happening: granting property titles instead of limited usufructs; freedom to produce, sell and even export and import without State mediation; and a tax moratorium for ten years until the current crisis has been transcended. Yet the government chose to ignore us and intensified its economic war of confiscations and arbitrary arrests against the independent farmers. Their current methods are not much different from those of War Communism -which Lenin had to rectify- or those of Stalin when he induced in Ukraine a famine that cost millions of lives.

You deserve the glory of contributing to avoid a famine of unknown dimensions for 11 million Cubans. Please encourage the Cuban government to find inspiration on the political prowess of the Vietnamese leaders who, after turning to the international community to help feed their starving population, embarked on the path of profound reforms that in just five years made them food self-sufficient and even exporters.

You should not act like Walter Duranty, the New York Times Moscow correspondent who became an accomplice of Stalin in hiding from the world the horrors of the Ukrainian famine during the Holodomor. Speaking loudly, clearly and timely to those in power on behalf of the voiceless, that should be your mission.

It’s our hope that you will understand the humanitarian urgency of this issue and will do your best, just as we do. Mincing words has never been a trait of us Cuban guajiros.