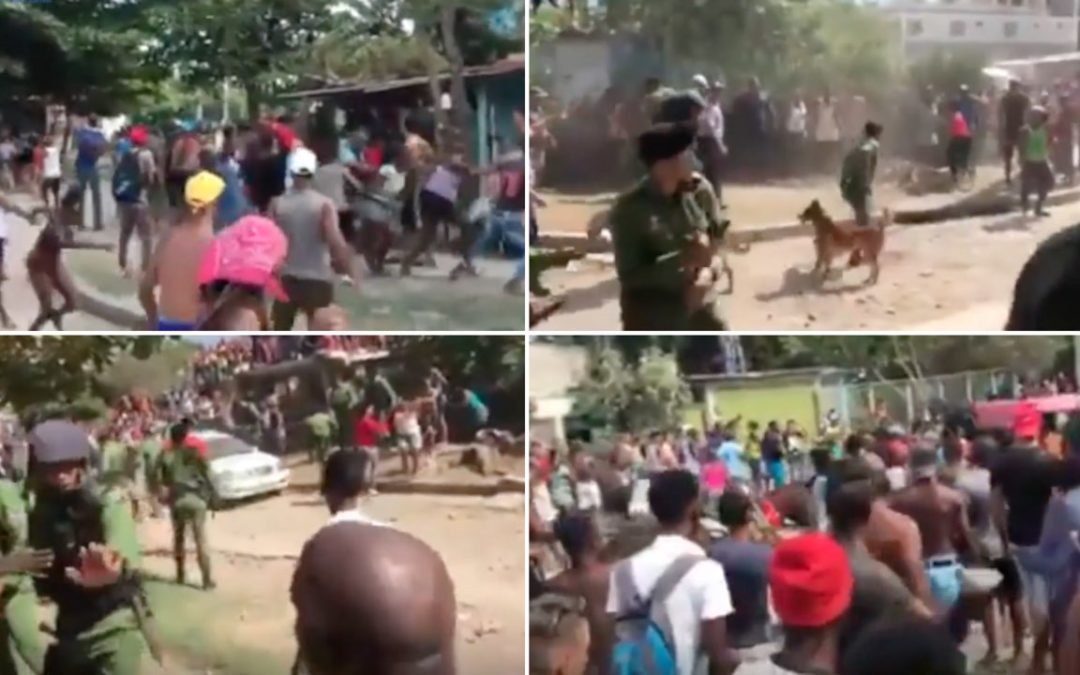 “When the black berets arrived (…) they threw themselves out of the car with the clubs in their hand, and handed out kicks and punches right and hard, even to minors. This created the discontent of those present, who left the rapist in the background and started shouting assassins at the guards and throwing stones at them. At first there were a few stones coming out of roofs and courtyards, but then anger became widespread, and everyone who found a piece of brick or stone threw it with hate at the guards.”

Thus described one of the participants to Diario de Cuba a spontaneous demonstration in Santiago de Cuba that led, from popular outrage against the rapist of an eight-year-old girl, to the improvised riposte against the gratuitous violence of special forces designed to stifling any spontaneous mass act.

The creation of this elite repressive body – its official name is MININT’s National Special Brigade – it goes right back to a spontaneous mass act that got out of Fidel Castro’s hands: the three-day admission of 10,800 Cubans to the Peruvian Embassy in Open 1980 . The main task of black berets, according to the Ministry of the Interior, is therefore to “face far-reaching and dangerous criminal, marginal and antisocial activities, particularly in the city of Havana.”

That is, dissolving any agglomeration of Cubans where the spark of a protest may fall and compromise the stability of the regime, which is increasingly volatile in these days of deepening the crisis.

Since its inception, black berets have been dispatched to control everything from a scuffle in a stadium, a street conga, or a possible protest over the government’s neglect after the passage of a hurricane, to a real protest by Pakistani students in Matanzas, where they came with puffed bayonets.

And they are behaving more and more violently, or that’s what images are filmed by the population a few days ago in the humble Nuevo Vista Alegre neighborhood in Santiago de Cuba, and weeks ago in Zulueta, Remedios, in the center of the island. (Their commander, Brigadier General José Luis Mesa Delgado, already has a record in process at FHRC’s RepresoresCubanos.com site)

As on other occasions, it has been announced that not the repressors who initiated the violence in the Nuevo Vista Alegre neighborhood of Santiago will be prosecuted, but the citizens who responded to the batons, kicked and even shot at the stone aggressors or whatever they found by hand.
The government also intends to wipe out the awkward witnesses who released the facts: the spontaneous citizen reporters in which the more than four million smartphone users on the island can become in the face of repression.

They would also apply decree-law 370, which authorizes fines and confiscation of phones to those who capture such images and upload them to social media.

But these seem like desperate measures when they are compared to the new attitude of the Cubans on foot, glaged to stand idly by. Today the same spreads at night a pan or blocks a street in water claim, they make performances and tweets against an attempt to chain art or information, which carriers respond by joining in a strike against provisions unfair, that people defend themselves to clean stone from MININT gorillas.

Castroist better understand that these 2020s are not Cubans from 1959; that 61 years of oppression, abandonment and hollow promises have changed them, possibly beyond the point of no return.