Instead of reforms, an urgent net to catch slip-away dollars 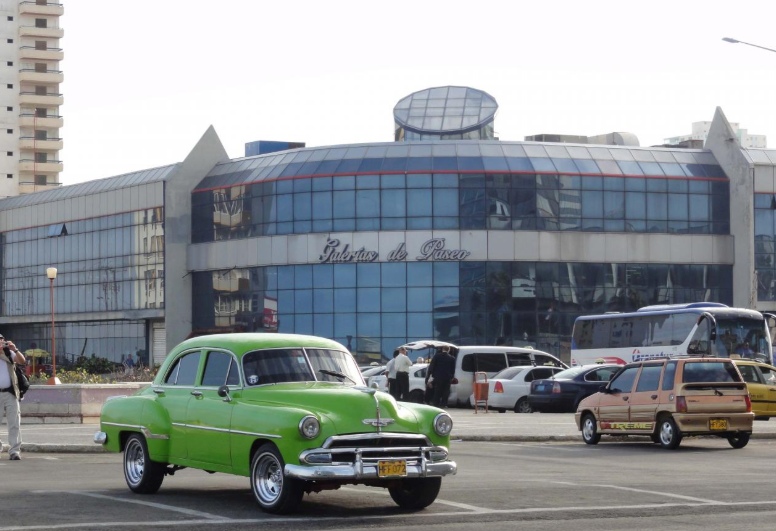 In recent articles, the respected Cuban economists Carmelo Mesa-Lago and Emilio Morales described a gloomy economic picture for Cuba, with the collapse of indicators such as hard-currency income from professional services, foreign investment, trade and oil supplies from Venezuela, reduced exports, defaults on foreign and supplier debts, and even a fall of the domestic oil production.

They cite among the main factors of what Morales calls “the perfect storm” that Cuba is approaching, the Venezuelan crisis, the United States measures (aimed to pressure Havana to withdraw from Venezuela) but above all, the inertia in which the economy remains, with a suffocated private sector and a subsidized, inefficient state-owned enterprise, subject to a command economy.

Most economists, even those most organic within the regime, suggested and expected deeper structural reforms – they remain frozen since 2017 – in the latter field, the only one of the above-mentioned three that the government could control, to unleash the nation’s productive forces and break the vicious cycle of the crises. 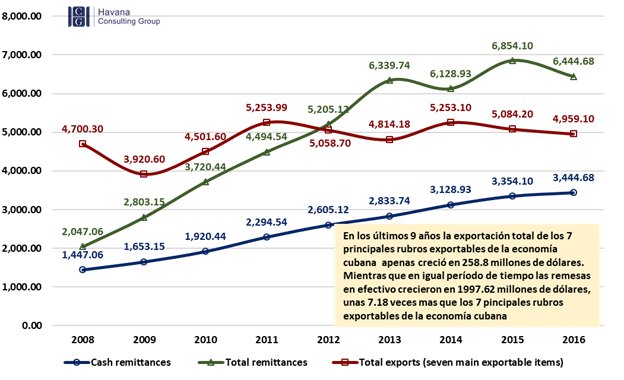 Comparison of remittances in cash and total remittances with the 7 main sectors of the Cuban economy (in millions of dollars), 2008-2016. Source: Havana Consulting Group

Instead, what they have unveiled are desperate measures to better control the only hard-currency income that keeps growing: family remittances (about $3.57 billion in 2017).

The State already collected a significant portion of these contributions, received by 30-40 percent of Cubans on the island, through the so-called Foreign Exchange Hoarding Stores. The profit margin on sales in these stores is usually higher than 200%. Yet they noticed that about one billion USD per year fled the island in the hands of private individuals (the so-called “mules”) who traveled abroad  either to buy inputs for the private sector or to buy, for resale purposes, high-end appliances, auto parts and other goods that the State does not sell.  Or it didn’t, because right now the Communist State doesn’t want a single dollar to slip away from its coffers.

Taking advantage of the long-standing State monopoly on imports, they have created a mechanism for those who send remittances to their relatives in Cuba to deposit them into dollar (or other convertible currencies) accounts that they must open in banks owned by the Cuban state. The convertible peso, or  CUC,  in force since 2004 and  boasting on  each bill that it “is redeemable for freely convertible currencies”, will not be accepted. Problem is, the CUC’s exchange rate to the US dollar ceased to be real and transparent a long time ago.

The prices of some of the high-end goods that will be sold don’t look too transparent either. The officials in charge of the announcement said they will “be competitive with those in the retail markets of our geographic area.”  But the price examples shown seem too high for their categories, and the officials made clear that they will  be subject to variations.

Many Cubans on the island, dazzled by the possibility of acquiring these dream consumption goods, and many from abroad who wish to provide their loved ones with the best possible standard of living under a survival regime, might bite the hook and deposit in these accounts money that they will never see in their hands again. We ought to recall that this is the same Cuban banking system that a few years ago temporarily prohibited foreign investors from repatriating their profits through the so-called “corralito financiero” (financial corral). If they did so to foreigners, what won’t they do to Cubans?

Under this hard-core police, repressive regime, it should not be ruled out for the measures to be supplemented ─citing some raison d’Etat─ with a ban on private companies and individuals to import (even as a limited luggage allowance) what could be considered as competing with the State octopus.

This new version of the gold houses of the late 1980s, where the government exchanged gold, jewels, antiques and other valuables owned by the Cubans for third-rate fans and audio recorders, is nothing more than a desperate measure to obtain hard currency. It will continue to postpone what clearly cannot wait any longer: as per Emilio Morales, to prevent the country from falling into the eye of the perfect storm “Díaz-Canel and his handlers have only one way out: to work out a solution to the Venezuela affair and implement true structural changes on the economy.”