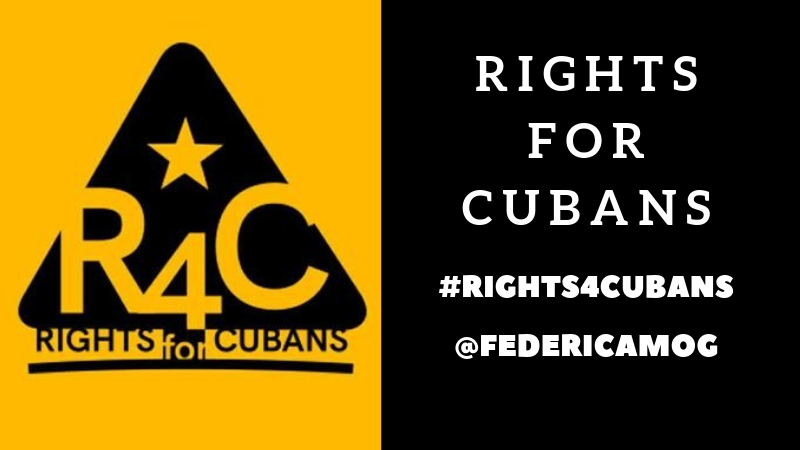 The Foundation for Human Rights in Cuba,FHRC, supports the following call made by @Rights4Cubans in claim of rights trampled upon by the Cuban regime and ignored in the dialogues with the European Union.

Send your tweeet this Sunday 8th and Monday 9th to Mrs. Federica Mogherini @FedericaMog with the hashtag: #Rights4Cubans while she visits Havana.

On Sunday, September 8th and Monday, September 9th, several Cuban human rights groups will be on Twitter regarding the visit to Cuba by the High Representative for Foreign Affairs and Security Policy / Vice President of the European Commission, Federica Mogherini.

We invite Cubans to tweet @FedericaMog  about the claim of each Cuban in and out of Cuba.

Why? For every decree, restriction, inhuman and unconstitutional measure taken by the Cuban government that violates universal values, human rights and democratic principles.

This is important because the Joint Council that Federica Mogherini will co-chair in Havana will discuss the state and future perspectives of the EU-Cuba relations, in particular on the Political Dialogue and Cooperation Agreement (PDCA).

The call on this twitter campaign is made by the civic platform @Rights4Cubans whose aspiration is precisely, that we Cubans have rights.

If you are a Cuban citizen wanting to demand the rights:

– of Cuban professionals who are unfairly punished into forced exile from the Homeland for deciding to break away from a contract abroad.

– of all those Cubans who are not allowed to travel abroad or prohibited to return to Cuba,

– of Cuban artists who wish to express freely and are censored,

– of the lack of freedom of entrepreneurs in small, medium enterprises and/or businesses,

– of Cuban professors who have been expelled from the classrooms for not educating students along the lines and doctrine of the CCP,

– for the rights of all Cubans to benefit from a reduction of the high passport prices and of its mandatory revalidation every 2 years,

– for the rights of  political prisoners and prisoners of conscience,

– for persons subject to modern slavery under State-mediated contracts,

– for the right to access truthful information and transparency in the State management of economic funds,

– for free expression and freedom of citizens to choose a political and economic system that is viable and prosperous for society,

Those who do not expect to Win are already Vanquished