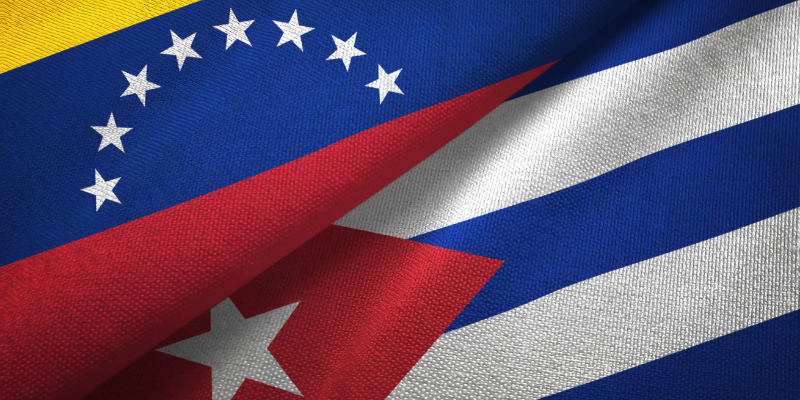 Cuba and Venezuela have built a mutually dependent relationship over the past two decades that has involved numerous illegal activities. Cuba has played a vital role in the downfall of Venezuela’s economy by exploiting financial resources in exchange for allowing doctors and engineers to work in Venezuela.

As the economic crisis only continues to worsen in Venezuela, the United States and numerous other nations have denounced the repressive regime of Nicolás Maduro. Cuba’s role in Venezuela’s downward spiral only further highlights the dangers of corruption, dictatorship, and socialist-centralized economy.

The corrupt regime of Nicolás Maduro relies heavily on drug trafficking and the outside assistance of foreign countries. The most notable foreign nations include China, Cuba, Iran, and Russia.

Cuba has played a vital role in establishing a drug trafficking power structure throughout the country while also ensuring that Nicolás Maduro retains firm control of the government despite numerous calls for his resignation.

A large number of high-ranking commanders in Venezuela’s military are involved in the drug trafficking operations of the so-called Cartel de los Soles (Cartel of the Suns, a reference to sun silhouettes in the officers’ epaulettes). These commanders and the whole Venezuelan military establishment usually receive advice, assistance and orders from a large contingent of Cuban government officials and military officers residing in Venezuela.

The United States government estimates that Cuba has more than 20,000 to 25,000 Cuban military members and intelligence personnel and embedded them within the Venezuelan military. Of course, Cuba denies these claims, while saying that over 20,000 Cubans are peacefully working in Venezuela as doctors and teachers.

However, many analysts have noted that the lack of military defections in Venezuela is primarily due to the fear of retaliation from Cuban officials inside the country. These Cuban military members are always looking at any potential signs of defection. A secret cellphone video at an intelligence center in Caracas displayed the brutal torture of Venezuelan military members accused of opposing the government. The infiltration of Cuban officials only further increases the tyranny of the Venezuelan government.

Cuba and Venezuela have long shared a close alliance due to the relationship between the late dictators Hugo Chávez of Venezuela and Fidel Castro of Cuba. Before the recent economic crisis, Venezuela shipped large supplies of oil on subsidized terms in exchange for Cuban doctors, teachers, and military personnel.

Cuba has taken advantage of this relationship by taking control over domestic surveillance and monitoring any signs of discord within the country of Venezuela. Cuba has also played a key role in developing military operations inside the country. Many of these practices only further serve to destabilize the entire region and has contributed to the humanitarian crisis in Venezuela.

How You Can Help – Support FHRC’s Awareness Efforts

The Foundation for Human Rights in Cuba was created in 1992 as a non-profit organization to establish a non-violent transition to democracy and protect the human rights of each citizen in Cuba. The relationship between Cuba and Venezuela only further demonstrates the repressive actions of corrupt governments that do not care about the freedom and value of each citizen.

Exposing human rights violations and raising awareness about Cuba’s support and influence on repressive regimes is the top priority at FHRC. Continually educating the public and policy makers on these criminal actions is the only way to bring awareness and expose the threats of these corrupt governments.

A donation to FHRC now helps continue to spread awareness about the oppressive actions of the Cuban government in supporting the criminal regime of the Venezuelan administration. These donations play a crucial role in empowering activists and promoting non-violent change in the Cuban government.

With your support of FHR Cuba, we can make lasting change by giving Cubans and Venezuelans both the freedom and democracy they long for!