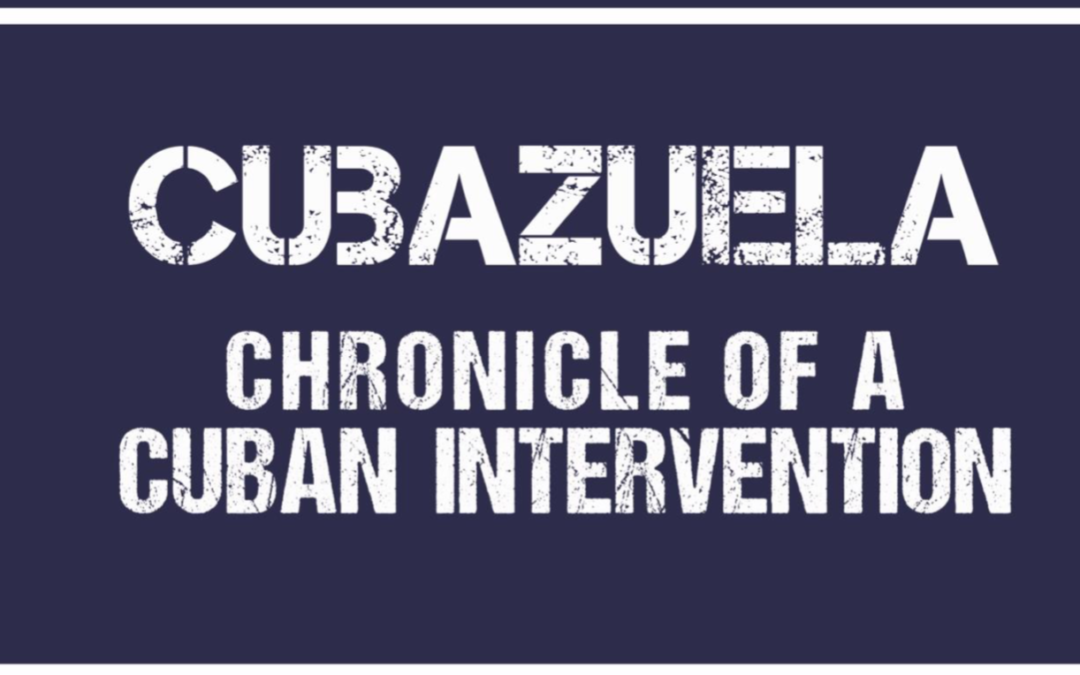 WASHINGTON, DC (April 12, 2019)— Today in Washington, DC, the Foundation for Human Rights in Cuba (FHRC) presented a report, Cubazuela: A Chronicle of Cuban Intervention.
The report is the first in-depth study of the role Cuba has played in Venezuela for decades, which has led to the ongoing humanitarian disaster, economic and political crisis the country faces today.
“This is the most comprehensive and specific account of where and how Cuba has intervened in Venezuela,” said Hugo Achá, Human Rights lawyer and Director of Research for the Foundation for Human Rights in Cuba. “Showing in detail an aspect that has long been overlooked by most, Cubazuela: Chronicle of a Cuban Intervention lays out exactly how Venezuela’s tragedy came to be. It proves the presence of a contingent— the Cuban interference— which acts as a de facto occupying force, coopting every relevant institution and controlling the strategic decision-making process of the Venezuelan regime.”
Authored by two former government officials who have since defected from Cuba and Venezuela, Juan Antonio Blanco and Casto Ocando, this report exposes key strategies and tactics used for communist interference in Venezuela. The findings show that the Venezuelan dictatorial regime will continue resisting until external pressures go beyond the scope of economic sanctions. The investigation also identifies some of the most powerful forces behind Maduro for the first time.
“For decades, the Cuban political machine has ruled with an iron fist,” said Juan Antonio Blanco.  “This report details the pervasive influence of a Cuban interventionist force used to ensure Maduro’s hold on power.  Moreover, the study points at how a once prosperous and sovereign country that has swiftly become a regime of terror can serve as a game changer between autocratic regimes and the forces of democracy at a global scale.”
The findings put forth by this report develop the argument and serious crisis of strategic proportions that involves actors, such as Russia, Iran, China, terrorist groups such as Hezbollah, drug trafficking regimes like the Bolivian government and dangerous TOC organizations.
Furthermore, the Cuban model of colonial domination exposed here for the first time, in factually based detail, will help policy makers and decision level individuals to understand the factors playing behind Venezuela’s growing crisis.
“The heart of the tyrannical regime established in Venezuela began with Nicolás Maduro, but has maintained its grip as a result of an unprecedented Cuban control structure. Strategically Cuban intelligence agencies have trained key individuals, in order to maintain “chavismo” in the palace. They have opened way for Cuban officials who give marching orders to suppress and torture Venezuelans, as well as create tactics to cover up the corruption in the already fragile upper echelons of the governing,” Casto Ocando added.
Blanco holds a PhD on the History of International Relations from the University of Havana.  He served as a diplomat in Cuba’s Mission to the United Nations (NY) where he acted as facilitator of negotiations for the Bureau of Non-Aligned Countries of that international movement. Blanco’s last governmental assignment was as senior analyst of US-Cuba relations for the Communist Party of Cuba Central Committee’s Department of the Americas. After his defection in Canada, he became the Director for Latin American programs at Human Rights Internet, assisting the first democratically elected government of Mexico in establishing its first dialogue with the country’s human rights NGO community.
A native of Venezuela, Ocando is an independent investigative reporter who has developed an extensive career in Hispanic media in the United States and Latin America.  Throughout his career, Ocando has specialized in subjects like corruption/money laundering, drug trafficking and transnational crime in Latin America, with particular emphasis on Venezuela.  Lastly, Ocando is the author of Chavistas en el Imperio— an extensive investigation covering more than a decade of the troubled dealings of the Hugo Chavez regime and its associates in the United States.
For a copy of the Cubazuela: A Chronicle of Cuban Intervention report, click here.