Cuban aid workers and the atmosphere of fear 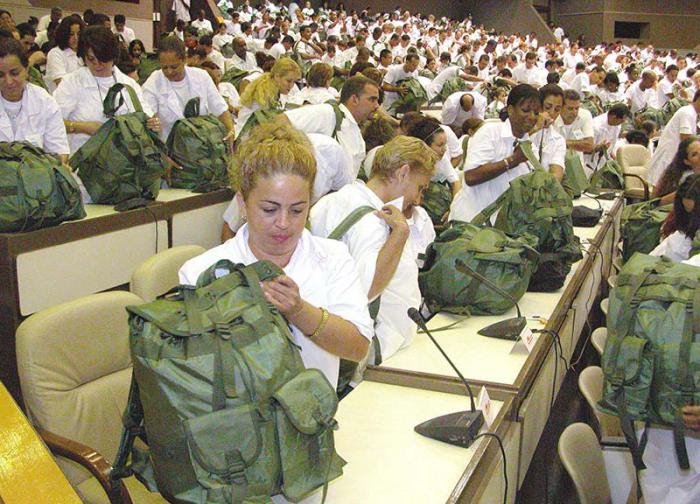 That Cuban doctors sent to “accomplish missions” in Venezuela are exploited is a well-documented fact: defectors and the Venezuelan opposition established that ─before the appalling devaluation of the Bolivar─ they were paid about $ 200 dollars a month out of nearly $ 4,000 that Caracas pays to Havana for each one. We’ve also read in the media every so often that their passports are retained and they are forbidden to leave their overcrowded quarters at night; that their relationships are monitored. There was also some evidence, not much though, that while in the “país hermano” they are compelled to fulfill, in favor of the Chavista regime, political tasks that have nothing to do with their scientific, humanitarian profile.

Now The New York Times has corroborated the latter and it has even revealed some untold extremes of such gross political manipulation. It considered fit to print a feature based on 16 interviews with Cuban health workers, under the headline ‘It Is Unspeakable’: How Maduro Used Cuban Doctors to Coerce Venezuela Voters.

Cuban health and other professionals, usually seek these missions because they have the possibility, even despite the above mentioned paycheck bite, to earn more abroad than in Cuba (the average monthly salary on the island is about $ 30; for MDs it’s about $ 40). Working overseas also helps them meet their relatives’ needs and buy some home “luxuries” (a laptop, a big screen TV)  they can’t afford back home; and some even buy and send home a few cheap, flea market-quality items so that their families can resell them on the island and supplement their meager ─even for a doctor─ income..

But there is a price to pay: Havana passes a bill for the perks associated with being an “internationalist aid worker”. Inside Cuba, a refusal to carry out the will of “the State” is usually punished by being politically nullified ─which entails social and economic annihilation as well. Still, the punishment is harsher for those who, having being promoted to “internationalist” well-being dare to forget the “generosity” of the revolution. Best case scenario, they can be repatriated and reassigned in Cuba to some remote, overworked and poorly paid medical post, without opportunities for professional or political advancement.

That systemic Sword of Damocles threatening to turn overnight a successful professional into “non-person” status is what moves individuals who are relatively cultivated and aware of the ethics expected of their profession to tarnish it, even if it means breaking the Hippocratic Oath. That is the case of Dr. Yansnier Arias, who confessed to the Times he still feels nauseated for having denied oxygen to an elderly Venezuelan with heart failure, because “oxygen had to be reserved as a political weapon” for Maduro’s  re-election.

As part of this electoral blackmail scam, the doctors pointed out, they were also ordered to retain vitamins and even medicines specific for chronic disease, then offering them door-to-door or in their consultations, warning beneficiaries that if they did not vote for Maduro or his party’s candidates that would be the end of it. Sometimes, seeking to boost Maduro’s results, fake Venezuelan ID cards were given to the aid workers.

The Cuban government rejected the doctors ‘ claims that they were forced in Venezuela to work on these campaigns and ordered to blackmail patients for political purposes, and it stressed the “honorable tasks” that their doctors have performed in the world.

José Miguel Vivanco, program director for the Americas of the human rights organization Human Rights Watch sees it differently. Mr. Vivanco told the New York Times that “The Cuban government wants to make sure that the Venezuelan regime survives and is willing to do everything in its power to support Maduro.”

Cuban doctors in Venezuela might still be asked to accomplish one more mission, equally incompatible with their profession: to serve as cannon fodder in the event of an armed conflict. In medical school they are required to pass a military training course as a precondition to graduate. And once in the international aid missions they are instructed to keep a backpack ready, in case the time comes to mobilize them as combatants, just like Fidel Castro did in 1983 with Cuban construction workers building a strategic airport in Granada.

It remains to be seen whether the atmosphere of fear surrounding Cubans on the island ─and following them everywhere─ which prompted the medical cooperators to desecrate their profession, as described by the New York Times, will incline them to cave in, come the moment of truth, to that old  military motto: “orders are obeyed, not discussed”. 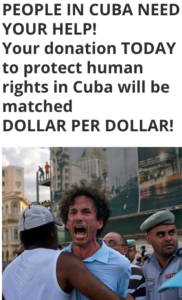